Staying Creative With Cups: An Interview with Roger Leonard Long

For Ridgeland-based artist Roger Leonard Long, Cups is where he got his start.

“My first exhibit was with Cups Fondren, when I was 18,” he said. “They were the first ones to allow me to exhibit, and I really appreciated them giving me the opportunity.”

Roger began drawing as a child and was recognized in school for his artistic abilities. He developed a love and skill for dance in middle school, and since then, has used choreography and portraiture in his life as creative outlets. However, despite his years of artistic skill, Roger’s first exhibit made him realize that he still had a lot to learn about the art world.

“I was a self-taught artist and didn’t know much about framing,” he said about that first exhibit, “But, through my exhibit, I was able to meet other artists… and I learned more about framing, matting, and presentation.”

Roger started his business, Portrait Phenomenon Studios, that same year with his wife Tena Long to provide space and time for him to take on commissioned pieces. Ironically, it was Cups, and not the pressure to meet commission deadlines, that motivated Roger to push his creative boundaries.

“Because Cups regularly allowed me to exhibit,” he said, “it motivated me to have new work–because I knew it would be seen.”

He also appreciated the audience at Cups and felt confident that his work would be well received by the public–something that is not always guaranteed when exhibiting at museums.

“The good thing about Cups is that I can display my Tupac, Biggie, and Kurt Cobain and I know they will be appreciated,” he said. “Museums will often curtail what you can put on display. I don’t have to worry about that with Cups.” 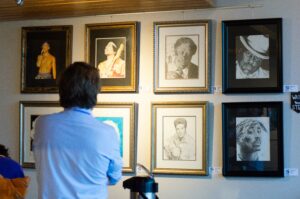 Roger’s latest exhibit is ongoing at Cups Fondren and features pieces, like a photorealistic portrait of Tupac, that were displayed during Roger’s first Cups exhibit all those years ago. Other pieces, like “This is Mississippi”, are more recent and display Roger’s growth as an artist. 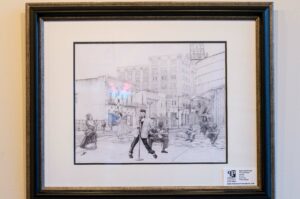 “This is Mississippi” by Roger Leonard Long

During his opening night, Roger answered many questions posed by exhibit-goers about his creative process and sources of inspiration. It is this connection between art, artist, and audience that is so important in maintaining a local artist community.

“…It helps people see what’s going on around the city. It’s good for Mississippians to see that artists can survive here,” he said. “It also gives the public a chance to support their local artists and show that as a community, we support the arts.” 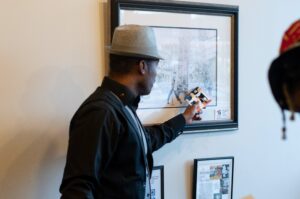 Roger discusses his art with exhibit-goers.

To any local artists wanting to have their art displayed at Cups, Roger had this advice to share:

“Go to other artist’s exhibits. Meet other artists and make that connection. Artists know the struggle and are willing to connect to uplift other artists. When you have your exhibit, invite other local artists and be open to constructive criticism. That advice that you get from artists is priceless.”

Roger continues to create photorealistic portraits and prints, sometimes while enjoying his go-to White Mocha from Cups. His artwork is available to view at Cups Fondren all summer. Be sure to follow him on Instagram (@portraitphenomenastudio) for updates on his latest work!